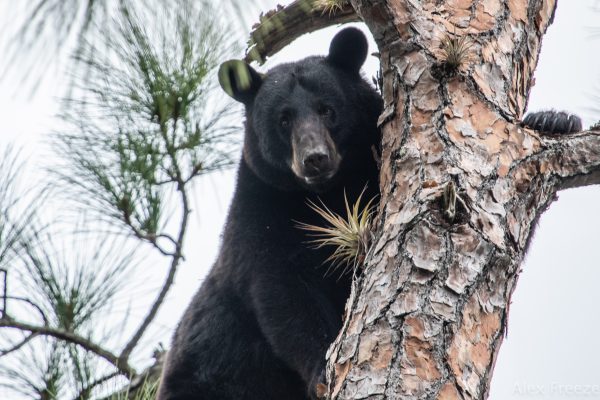 June 29, 2022 – In 2009 a young black bear with the identification tag M34 traveled 500 miles over eight weeks in pursuit of a mate. Through its journey, the bear revealed the existence of a statewide Corridor that wildlife needs to survive. The discovery also highlighted the precarious nature of the connections between the land parcels that make up this Corridor. M34’s journey was a key proof point in the vision for a protected wildlife Corridor, which, after decades of work from conservationists, scientists, politicians, and many others, was signed into law following unanimous bipartisan support by the Florida legislature on June 29,2021.

On the anniversary of this landmark legislation, the Florida Wildlife Corridor Foundation commemorates the progress made since this law was passed and will continue to advocate that all at-risk areas in the Corridor be protected. To date, the Act has resulted in the protection of at least 36,445 acres of land with an investment of $32M in public funds for conservation across the state.

The Florida Wildlife Corridor comprises nearly 18 million acres of contiguous wilderness and working lands crucial to the survival of many of Florida’s 131 imperiled animals, including the Florida panther, Gopher tortoise, manatee, Burrowing Owl, Red-cockaded Woodpecker, Swallow-tailed Kite, and black bear. In addition to protecting wildlife, conserving wild spaces is crucial to mitigating climate change, as studies show that natural spaces play a significant role in reducing greenhouse gases and guarding against the impacts of increased temperatures.

The Corridor also protects ranching and fishing, supporting large sectors of Florida’s economy. Overall, 10 million acres of the Corridor are already protected, including 75 state parks and 32 state forests, while the remaining 8 million acres are opportunity areas which are not yet conserved. The Everglades headwaters and other crucial areas which feed springs and reservoirs can be found in the Corridor, which is responsible for protecting much of Florida’s drinking water.

Florida is one of nine states that have passed wildlife corridor-related legislation. Of those nine,it is the fastest growing and second-most populous. With roughly 1,000 people moving to Florida every day, preserving these unprotected areas is even more urgent.

“This anniversary provides an opportunity to reflect on the progress to date and envision how best to continue protecting the Corridor and the wildlife which inhabit it,” said Mallory Dimmitt, CEO of the Florida Wildlife Corridor Foundation. “Florida on healthy and sustainable green infrastructure, and we need to continue taking thoughtful steps to ensure the Corridor’s protection. From the natural resources that millions of Floridians rely on, to a variety of industries crucial to our state’s economy, preserving Florida’s wildlife and wild spaces has many ripple effects.”

Of the 14 land parcels conserved to date since the Florida Wildlife Corridor Act via the Florida Forever process, the following examples demonstrate the remarkable biodiversity of the Corridor and highlight what would be lost if the rest of the Corridor is not protected:

• The Red Hills Conservation Area protects biodiversity and endangered animals through conservation of pine savannah, rolling hills, and miles of shoreline on Lake Miccosukee. This 4,132-acre easement was approved in March 2022 and is the first acquisition in this critical project area. This project’s success is thanks to the leadership of Tall Timbers, the landowners, and the Florida Department of Environmental Protection.
• Corrigan Ranch, part of the Corrigan Ranch Florida Forever Project, provides resource-based public recreation opportunities, such as assisting with the completion of the Florida National Scenic Trail and expanding the acreage of the Kissimmee Prairie Preserve State Park, which is the state’s first Dark Sky Park (recognized by the International Dark Sky Association).This 4,381-acre acquisition was approved in September 2021 and was funded in part by the U.S. Air Force to buffer the nearby Avon Park Air Force Range.
• The Wakulla Springs Protection Zone protects Florida’s water supply by conserving land above the conduits that feed the caverns and springs, connecting one of the largest and deepest artesian springs in the world to Apalachicola National Forest. This 313-acre acquisition was approved in March 2022. Significant funding for the project was secured by the Florida Forest Service through the Forest Legacy Program.
• The Coastal Headwaters Longleaf project serves the dual purposes of protecting forest habitat for flora and fauna and acting as a buffer to Whiting Field, protecting the installation from encroachments that might be incompatible with the military mission. This 2,115-acre land acquisition was approved in September of 2021 with the support of the Forest Legacy Program, The Conservation Fund and the National Fish and Wildlife Foundation/Walmart’s Acres for America Program.

The framework of the Florida Wildlife Corridor has successfully re-energized land conservation in the Sunshine State, which benefits not just the Corridor, but the entire state. Conserving land and water is a win for Floridians as well as the plants, animals, and economies that rely on a healthy environment.