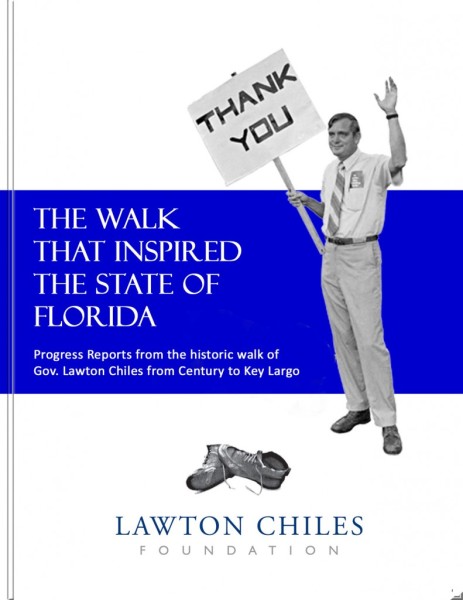 In 1970 Lawton Chiles, a little known state representative from Lakeland, decided to run for the U.S. Senate. To generate interest and media coverage statewide, Chiles embarked on a 1,003 mile, 91-day walk across Florida from Pensacola to Key West. The walk earned him recognition, as well as the nickname that would follow him throughout his political career – “Walkin’ Lawton.” Chiles walked at times alone, and at times he was joined by ordinary Floridians. In later years, Chiles recalled that the walk allowed him to see Florida’s natural beauty, as well as the state’s problems, with fresh eyes. He won that race, and eventually was elected to two terms as governor of Florida.

While the goals of the Florida Wildlife Corridor are less politically oriented, we drew inspiration from the story of an ordinary Floridian connecting to citizens through a statewide trek. This expedition also follows the models set forth by John Muir and more recently Michael Fay, whose narratives of their wilderness experiences catalyzed conservation. Through the combination of a scientifically informed strategy and artful outreach, Fay’s “Megatransect” through Central Africa led to the creation of 13 new national parks in Gabon. Muir had pen and paper, Fay had color photographs and National Geographic. The Florida Wildlife Corridor has similar tools plus the new arsenal of social media. We will be able to report in vivid detail with words, photos and video straight from the field on a daily basis, providing a potentially unprecedented suite of public awareness. 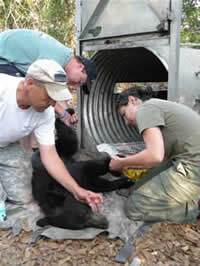 The research and field work of David Maehr and Mason Smoak built a  foundation for efforts to preserve Florida’s black bear habitat.

The 2012 Everglades to Okefenokee Expedition was led by conservationist Mallory Lykes Dimmitt, photojournalist Carlton Ward Jr, filmmaker Elam Stoltzfus and bear biologist Joe Guthrie, who tracked bear and panther habitat. Guthrie completed his Master’s research on a special population of black bears, which lives almost entirely on private land in central Florida and is a stepping stone for connectivity north from the Everglades. Guthrie’s advisor, David Maehr, died in a plane crash in 2008 with agricultural and conservation leader Mason Smoak as they were trying to locate a missing bear. Their research is the inspiration for the Florida Wildlife Corridor and it is our effort to keep the implications of their work alive.

The concept of a statewide ecological corridor is not new to Florida. The Florida Wildlife Corridor expands on decades of work by numerous conservation organizations, including The Nature Conservancy’s Northern Everglades initiative, the Conservation Trust for Florida’s Ocala to Osceola Ecological Greenway project, the Everglades Foundation’s multi-partner Kissimmee River Restoration, U.S. Fish & Wildlife Service’s panther research, Archbold Biological Station/University of Kentucky’s black bear research, WWF’s Florida Ranchlands Environmental Services Project (FRESP) around Lake Okeechobee, the U.S. Dept. of Agriculture’s investment in Fisheating Creek, Florida Forever, the Florida Wildlife Conservation Commission’s Cooperative Conservation Blueprint project, and countless hours of work by many others that have given us the opportunity to connect what remains.

The Florida Ecological Greenways Network (FEGN) provides the scientific foundation for the Florida Wildlife Corridor. FEGN was an outcome of earlier efforts to elucidate the importance of protecting wildlife corridors and a network of conservation lands spearheaded by Larry Harris and Reed Noss at the University of Florida in the 1980s. Today, the Florida Wildlife Corridor benefits from our partnership with the Conservation Trust for Florida, a statewide land trust, who works with the DEP Office of Greenways and Trails and other partners to educate and implement protection of the FEGN. The Florida Wildlife Corridor combines all of the FEGN Critical Linkages from the Everglades to Okefenokee to highlight the importance of protecting a functional network of public and private conservation lands throughout the Florida peninsula to protect our native biodiversity, essential ecosystem services, and the rural natural heritage that is so unique to Florida.

The History of Florida Wildlife Corridor Science and Planning Efforts by Tom Hoctor, Reed Noss, Richard Hilsenbeck, Joe Guthrie, and Carlton Ward provides an expanded discussion of the history and scientific foundations for Florida’s wildlife corridors. This article is now available for download in pdf format.

The Florida Wildlife Corridor was founded by Dr. Tom Hoctor, Director of the Center for Landscape and Conservation Planning at the University of Florida and Carlton Ward Jr, a Conservation Photographer focused on Florida’s living heritage. Richard Hilsenbeck, Director of Conservation Projects for the Florida Chapter of The Nature Conservancy, co-founded the initiative. Mallory Lykes Dimmitt co-founded the Florida Wildlife Corridor organization and serves as its first executive director.

Their vision and collaboration was inspired by the bear research of David Maehr and the commitment of his students, Wade Ulrey and Joe Guthrie, to continue his legacy. Through this project, the team hopes to transcend cultural, perceptual and geographic boundaries, to connect people to the places we need to protect, and ultimately help reconnect and restore the fragmented lands and waters in Florida.

We want to thank the partners who helped us establish the
Florida Wildlife Corridor on March 1, 2010: