In this video story segment from the FWCE documentary, Joe Guthrie shares the story of the University of Kentucky’s bear research in Central Florida. UK’s research was intended to study movements and find patterns that might explain how a tiny bear population keeps afloat in a landscape dominated by humans. Watch now to learn about our inspiration for the Expedition.

Meet the bear that inspired the Expeditions

Excepted from an essay by Joe Guthrie

We use fire lanes to search for fresh bear sign, so we knew a little about M34 before we caught him from following his tracks in the sand. We could not yet imagine how important that unassuming young male would become to us. 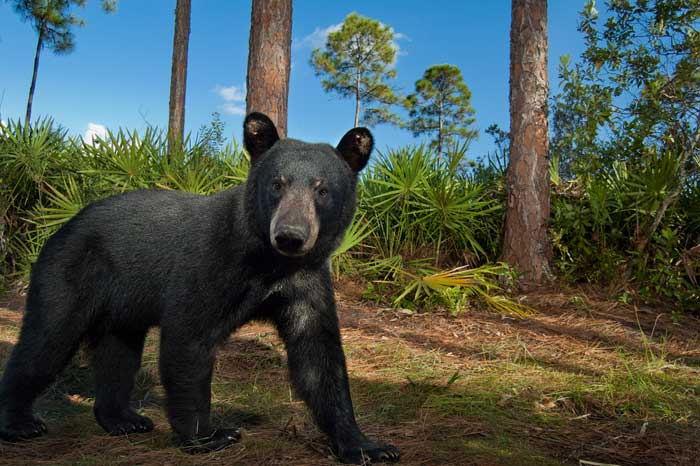 Florida’s black bears require many different habitats throughout the year to find food and mates. Their travels are accomplished through corridors that connect the hotspots that support their diet. Photo by Carlton Ward.

The map of M34’s journey clearly illustrates both the corridors and public lands that facilitate travel and the barriers posed by Interstate Hiways.

After crossing the Kissimmee River, M34 made for the south side of Lake Marion and the Adams Ranch. He lingered there for a week before turning back to the southwest, using Three Lakes Wildlife Management Area and then crossing the river again near the south end of the lake. He continued southwest until he came back to the Lake Wales Ridge and the town of Frostproof in Polk County. He passed near the town and finding nothing of interest, continued on his way, this time turning north and heading up the eastern edge of the Ridge.