A View From the Other Side of the Lens: John Spohrer

September 16, 2012 · by Florida Wildlife Corridor · in The View from the Other Side of the Lens 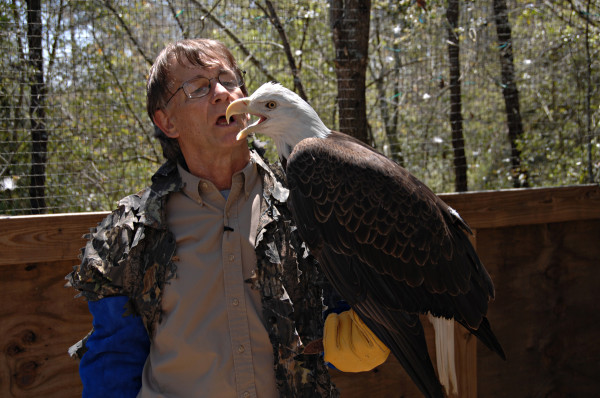 Critical Linkages Photographer John Spohrer interacts with a bald eagle, a unique opportunity presented through his work with the Florida Wild Mammal Association.

Between the land of the Florida Panhandle, and the waters of the Gulf of Mexico, lies the Forgotten Coast. Here, among the creatures of the sea, Photographer John Spohrer found the “functioning ecosystem” to fit his lifestyle and his career path as an outdoor writer, when he moved there in 1980.

Born in Shreveport, LA, John attended Louisiana State University and studied graduate-level creative writing at Florida State University. After serving his time in the US Army stationed in Hawaii, John set out for Florida to find “something worth preserving.” Although throughout John’s life he was always taking pictures, he explains, “There was a specific time in 1999 when I said, ‘I’m through fishing and doing the other things I’ve done outdoors.” He decided to help establish what he calls a baseline. “People go out and they say, ‘This looks wonderful,’ ‘This is pristine,’ This is what it’s always looked like.’ No, it’s not. There used to be a lot more here: more plants, more creatures. This is the baseline that we have lost. And if you don’t protect it you will lose the rest.”

To establish this baseline, John uses a “naturalistic style” in his landscape and wildlife photography. A fascination with birds and color, particularly sunsets and sunrises drives the focus of his photography. Three to four years ago, he gave himself the task of shooting a sunrise every morning. Here, early in the morning, is when John finds he can photograph animals in their natural environment and in an environment most people rarely find them.

“The camera allows us to see things that we can’t see with our naked eyes. We can’t see that bird snatch that fish out the water like [a camera can.] We can’t see it toss it in the air and grab it by its head. And photography presents a way to save it for us; a way to save that moment in time. [Photography] allows us to look at this action and see it and appreciate it in a different way than we can just by viewing it.”

This is the thought John depended upon when he visited the Camp Blanding-Raiford Greenway area, his Critical Linkages assignment. John describes the area as similar to “being on the face of the moon.” However, his photograph of the area shows us that even in places which exemplify the worst of human impact and natural resource extraction, there is astounding beauty. Once conserved, the greenway will reconstruct itself. Instead of “acres of barren land and earth movers as far as you can see,” there will again be a connecting habitat for critical Florida species. Though the “baseline” of the Camp Blanding-Raiford Greenway is gone, much will be done by preserving the area. 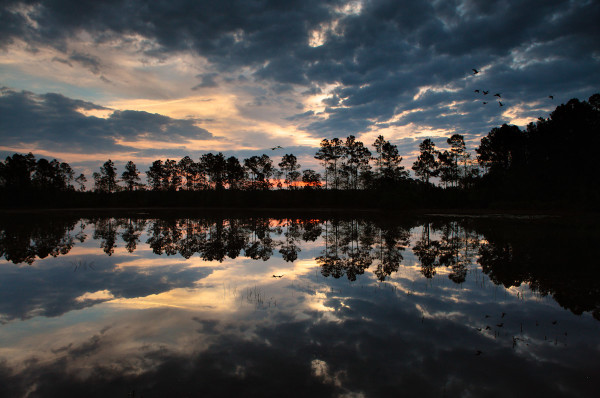 John Spohrer captures the color and light of the sunrise over a pond within the Camp Blanding-Raiford Greenway.

This applies to places all over the world, not just Florida. “Florida is important for a number of reasons…but I wouldn’t put Florida’s problems above other places. I encourage people in every place to work for the conservation of what they have left.” John explains, “Florida is important to me because I’m here. It’s an example of thinking locally and acting locally. You have to influence what you can. You might start in your yard, which moves to neighborhood, which moves to town, and then to your state, and then to our country. But there needs to be a political will to value the natural world.”

“Always with photography my goal has been to say if you don’t raise your voice, if there’s not the political will to protect creatures and places, they will be gone soon. Period. There’s no other message I have to deliver.”

John works hard to create broad influence in his community. He and his wife, Helen, own and run the cable TV station Forgotten Coast TV. This TV channel is a platform for eco-education particularly focused on conservation and the unique culture and resources of the Forgotten Coast, and Franklin County. John often uses his photography in the programming, which is aimed at educating both visitors and young students. His focus on eco-education, particularly with children, spills into his avid work with the Franklin County Humane Society and the Florida Wild Mammal Association. Additionally, John is currently promoting the most recent of his three books, “The Seasons of Apalachicola Bay.” Through 390 photographs and the accompanying narration, John takes the viewer through the ten natural events which make up the seasons of the bay.

Throughout all of his work, John attempts to foster a connection between his viewers and “the intricacies of nature that people just don’t look at.” He states, “If there’s anything that could encapsulate what I’m trying to do, it’s that people see a photo and realize, ‘There’s a beauty here I’ve been missing. Maybe I shouldn’t mow it down or run it over.’” As an artist, a steward of the land, and an educator John exemplifies and promotes his belief that, “I’d rather light the candle than curse the darkness.”

Click here to find further information about the Camp Blanding-Raiford Greenway. To learn more about John and view his work visit: forgottencoastoutdoors.com/, or follow him on Facebook. Additionally, you can order and learn more about his new book, “The Seasons of Apalachicola Bay at: forgottencoastoutdoors.com. If you’re interested in Forgotten Coast TV, and John’s photography blog, please explore: