A View From the Other Side of the Lens: Steve Vaughn

September 24, 2012 · by Florida Wildlife Corridor · in The View from the Other Side of the Lens

When Steve Vaughn, Critical Linkages Photographer for the Old Town Creek Watershed, first moved to Florida in 1957, his destination of Cocoa Beach was home to billions of mosquitoes and little else. Although at first the move, and particularly the mosquitoes, seemed like a disaster, Steve immediately recognized the beauty of his new home. Steve remembers crossing the St. John’s River on his way to Orlando, where they did all of their shopping: “I remember thinking what an unusually spectacular looking area it was.” 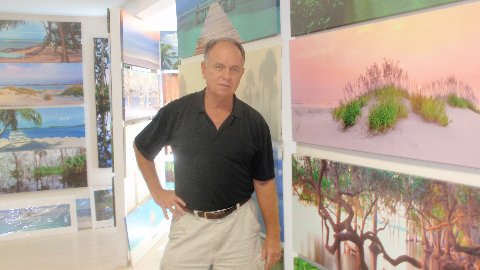 After majoring in Journalism at the University of Florida, Steve’s talent as a writer and interest in sports earned him a job with the Orlando Sentinel, where he worked for 25 years as a sports editor, managing editor, and executive editor of the newspaper. Although Steve always enjoyed art, working with so many photographers in the newspaper sparked his interest in photography. Through his colleagues Steve learned “how a camera works.” After frequenting a number of outside art shows, Steve decided he was going to change his path in life: a complete 180 from his original feelings about Florida, Steve chose to stay and indulge his interest in photography, instead of moving elsewhere to continue in the newspaper business.

Along with the more technical skills he learned from his colleagues, Steve recognized that “what separates a photographer from anybody else is the ability to go see a picture; the ability to see something there that somebody else might not see.” But, just being able to see a picture does not necessarily draw an audience. Steve acknowledges that there are “so many ways” to use photography these days, “so many ways to present it. To be successful, you have to have a niche.” Steve chose Panoramic Photography, a style perfectly suited for the landscapes of Florida.

While he enjoys shooting long, wide cityscapes, a natural fit for the panoramic format, the majority of Steve’s photographs display the tropical colors and beaches of Florida. In particular, Steve employs the use of water, since people love and identify with it. He explains, “When somebody looks at my work, they tend to think of it as an escape, in a sense, from real life. I’m photographing two chairs on the beach and I know that people will like that picture because they’ll place themselves in those chairs.”

“You know the old ‘A picture’s worth a thousand words’ saying? It’s a cliché but it’s true! You can talk about the St. Johns River all day, but if you talk about it and show somebody a picture of what you’re talking about, you can better communicate what you’re trying to say. It really comes down to that. Pictures can take people places they wouldn’t otherwise go or understand.”

That being said, Steve’s Critical Linkages Assignment, Old Town Creek Watershed, provided him with a completely different landscape. “It is by-and-large a pine and palm meadow kind of place. Where I was, there is no water. Not a drop. So to come up with something of interest in a place where there’s no water, was a bit more of a challenge. There were rows and rows of fields, pastures, and cattle, and dried up creek beds.” Although the Old Town Creek Watershed did not provide Steve with his usual draw of water, he still considers it to be one of “the beautiful places that we’re saving for the next generation. It is a watershed and therefore will have great value in the future. Water will be the forerunner of the next 100 years; anything that has to do with water will be of great political and economic importance.” 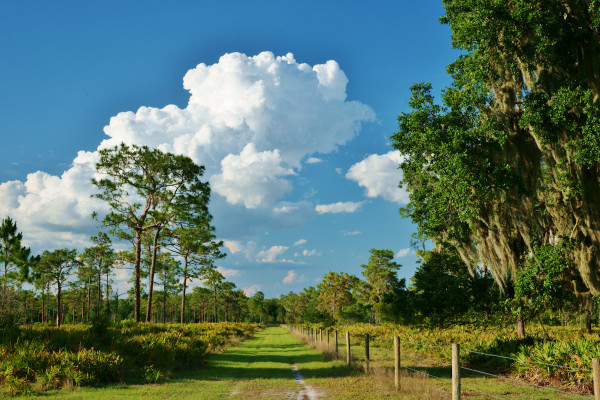 This is a large part of the reason Steve focuses his work on Florida. “Florida is a case study: the environment here is so fragile because it is interconnected. Florida is all about water. But because it’s interdependent, when one area is polluted, it flows into the next. Where does it end?” As with all of our Critical Linkages photographers, Steve’s photography can be a part of this end.

However, for Steve photography is more than a job and a form of speaking for nature. He explains that above all, he receives the most enjoyment out of his work from having the ability to be creative. This is also why he paints as a hobby, “for personal enjoyment. If I have an idea, I just go do it I don’t have to ask anybody. Having the freedom to do what you want is a treasure. There is great freedom and enjoyment in doing whatever you want in life. If you’re lucky enough to have that then you’re truly blessed.”

To read more on the Old Town Creek Watershed click here. You can learn more about Steve Vaughn and view his photography at http://www.stevevaughn.com/, or by following him on Facebook.