A View From the Other Side of the Lens: John Moran

October 2, 2012 · by Florida Wildlife Corridor · in The View from the Other Side of the Lens 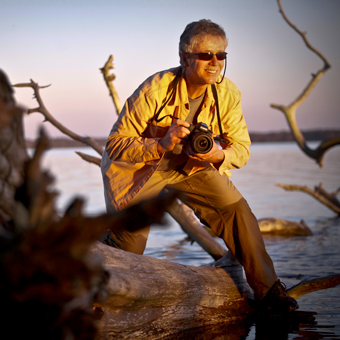 Critical Linkages Photographer John Moran in his favorite setting: water. He depicted a section of the Volusia Conservation Corridor for this project.

Although it might seem like a young age for such a serious relationship, Critical Linkages Photographer John Moran began his love affair with Florida when he was moved from Boston at the age of two. As a child growing up in Fort Myers, John always enjoyed nature exploration and observation, and became interested in photography in high school. He went on to gain his degree in journalism from the University of Florida, where he learned his trade as a photographer while contributing to the student paper, “The Alligator.”

After graduating, he chose to stay in Gainesville, his “shining city on the hill”, to begin a 23 year career with The Gainesville Sun as a staff photographer.  While working, John would use his time off for his hobby of nature photography. However, as more of his work was printed and he continued to go back and visit the same places, he began to see the changes happening quickly all over Florida.

“I just wanted to be a nature photographer shooting pretty pictures, but reality keeps getting in the way…I could no longer ignore the realities of my beloved state in decline. Its future is being decided by people who look around Florida and see only opportunity for profit. What I see is opportunity for spiritual connection.”

This inspired John to start “channeling an energy that had long lay dormant because of [his] previous career as a journalist.” As an independent photographer, John is “increasingly finding [his] voice and getting more comfortable doing just that.” He began public environmental advocacy speaking about 10 years ago. Since then he became a key component to the Critical Linkages project. 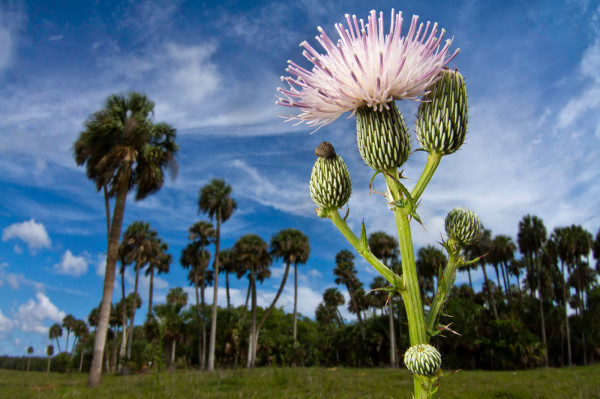 Off-camera flash is a technique typical of Critical Linkages Photographer John Moran‘s style. He he uses it to play with the light in this picture of a bull thistle along the Volusia Conservation Corridor.

John took-on the depiction of a section of the Volusia Conservation Corridor along the St. John’s River. He explains, “I approached it as an art photographer looking to tell the story of this area from an aesthetics standpoint; to reach people with the sheer beauty of what I saw.” Here, while lying on his belly in the mud near the river, John captured images of sandhill cranes, white ibis, and bull thistle, which thrive among the many other flora and fauna of this area.

“My job as nature photographer is to be amazed and to go out and bring back evidence that ours is a state yet blessed in the abundant gifts of nature. But also it’s something of gentle wake up call to people.”

The power of a project like Critical Linkages is, as John says, that “pictures have a way of reaching people in ways that words alone cannot. Pictures can show people a reason to have their hearts swell with pride at place. They can show that there are parts of Florida yet wild and free that need to be protected. I’ve seen too the power of photography used to help tell a story of our abuse of the gifts of calling this place home.”

A white ibis, posed handsomely for Critical Linkages Photographer John Moran. He lays among the mud to capture the essence of this magnificent bird in the Volusia Conservation Corridor.

While highly involved in LINC, John spreads his energy to a number of other projects as well. The most prominent of these is a new project called “Springs Eternal.” Throughout recent years while revisiting formerly beautiful springs, John realized that, “Our springs’ waters are not flowing as freely as they once did. The clear blue springs are turning murky and green and in some instances even drying up. There’s a disconnect I see in Florida of awareness as to what’s happening to the springs and the degree to which the public the public is tuning in.” As a result John is working with Lesley Gamble to put together an exhibition to be displayed in the Florida Museum of Natural History in March of 2013. “We need a new way of thinking about water here in Florida, and about the way we consume and value it; the way we pit environmental preservation vs. prosperity.”

John is also working on a long term statewide book project in which he will photograph natural Florida county by county. Each of the 67 counties will get a six page spread in One State, Many Worlds. Additionally, John is contracted to create an exhibit on the wildflowers of Florida, and is working on a long term project on the Suwannee river. He is building a raft which he will use to photograph the river and create another book project focused upon “Florida’s grand old river.”

“The world is full of beautiful places for some other photographer to fall in love with. I believe that you can live wide or live deep. The world is full of beautiful places, but Florida is the place for me. Florida is my first and only love. Our bond with our place on the planet is one of the most deeply felt needs of the human soul, and there’s not a day of my life I’m not aware of my sense of connection with this place.”

Throughout all of his projects John retains a similar purpose: “I have to confess, I think that my goal is the win the hearts and minds of the people who call this place home; the people who live here who need a reality-check.” He quotes the late great Florida writer Al Burt, “Increasingly Florida is being populated by people whose bodies are here but whose hearts continue to reside elsewhere.” That being said, John continues to inspire and reach out to the others who share his love of Florida, and focuses his energies and thoughts on his home and the place that captured his heart.

To learn more about John and his numerous conservation projects and to view some of his work, please visit johnmoranphoto.com.