A View From the Other Side of the Lens: Jesse Reeder

September 11, 2012 · by Florida Wildlife Corridor · in The View from the Other Side of the Lens

Born in the jungles of Papua New Guinea, and raised in the South Pacific as the child of missionaries, the landscapes of Florida quickly found a place in the heart of Critical Linkages Photographer Jesse Reeder when he moved there full-time in 1989. Since then he’s made his life as a husband, father of one, and homebuilder in Geneva, Florida, just outside Orlando.

While his son is the largest focus of energy in Jesse’s life, he always seems to have time for his photography in the early mornings. Jesse is a self-taught photographer, whose portfolio began with a trip to Costa Rica a couple years back. Photographer Steve Vaughn and his tropical panoramas encouraged Jesse to “get serious” about his relatively new hobby. After attending a presentation by John Moran at a recent Audubon meeting, he was “both humbled and motivated …to conserve the diverse environments of Florida.” As a result, Jesse now uses his photography to expose the fragility of Florida’s landscapes.

“People take it for granted that when they want to go to the beach, it will always be there. They race back and forth on the highway at 70 miles an hour past tranquil places they don’t even know exist. I try to capture the moments that touch me and share those with others. My hope is that they will be more aware of what’s around them, and be more careful to protect and conserve areas and wildlife that are slowly disappearing.”

As one of LINC’s Critical Linkages Photographers, Jesse took-on the depiction of Deep Creek, an area of the Volusia Conservation Corridor and one of great importance to Jesse as it serves as his backyard and the setting for a majority of his work. To Jesse, the area represents “Old Florida, the way it looked 100 years ago.” Deep Creek is one of Jesse’s favorite places to photograph. Although it is a place he’s been many times, he always finds “a new angle, view, and lighting.” The conservation of Deep Creek would be a positive gain for Jesse as well as a large number of other recreationists who use the area. As he says, “If we can enjoy and preserve something for ourselves, we can preserve it for wildlife as well…[Deep Creek] is not just a place I go to take pictures. I realize how crucial this spot is. It is critical to keep this natural corridor for animal habitat.” 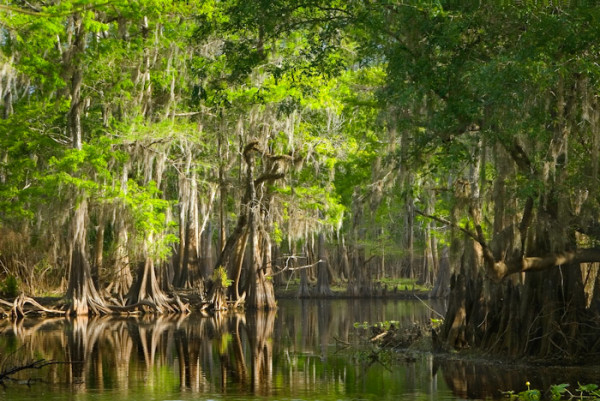 Jesse Reeder utilizes his skill at capturing reflection and color in this photograph of Deep Creek. Deep Creek is a section of the Volusia Conservation Corridor, one of Florida’s Critical Linkages.

Jesse sells some of his work at a local outfitter shop, frequented by both Florida Natives and the occasional tourist. To hit at the hearts of all his buyers, Jesse works to capture “the breathtaking beauty and amazing light and color” of his landscapes. When you’re there “at the right place at the right time…and all those components come together it really takes your breath away. Those are the things that move people” and simultaneously glue their eyes and minds to the photograph. Jesse explains, “I’ve had people react with, ‘Where did you take that picture?!’ and I tell them right around the corner. They can’t believe it. They’ll say, ‘I think I’ve been there,’ or ‘That’s right where I grew up!’”

For people who are less familiar with Florida landscapes, these photographs are still just as breathtaking, and perhaps also exotic and dangerous. Visitors don’t often think about exploring alligator filled swamps on their own. But Jesse believes that his photographs can have the same end impact with all viewers.

“Whether a landscape is familiar or new, people will still be stunned by its beauty. There are so many tourists that come here; Florida is such a destination. This can be a good and a bad thing. But the number of visitors and the money they generate can help drive conservation, especially if they are made aware of the fragile nature of the places they are seeing and experiencing.”

This is the goal Jesse keeps in mind as he speeds through the rivers and waterways of his backyard at dawn, searching for the scenes of his majestic landscape and panoramic photographs. But he also keeps this as a time to himself. When he is shooting, he explains, “I feel at peace. It’s a spiritual time for me when I can be connected to my faith and my God… It really makes you appreciate what’s out there…When you’re doing photography, you’re focused on everything: you’re looking, you’re listening, you’re watching the light. That’s when everything comes into focus. When you press that shutter on your camera, you know you have something special.” Something special we hope we can conserve for people and wildlife alike.

Follow this link to learn more about the Volusia Conservation Corridor and Deep Creek. Further information about Jesse, and a gallery of his work, can be viewed and purchased on his website at http://www.deepcreekgallery.com/. You can also follow Jesse on Facebook.